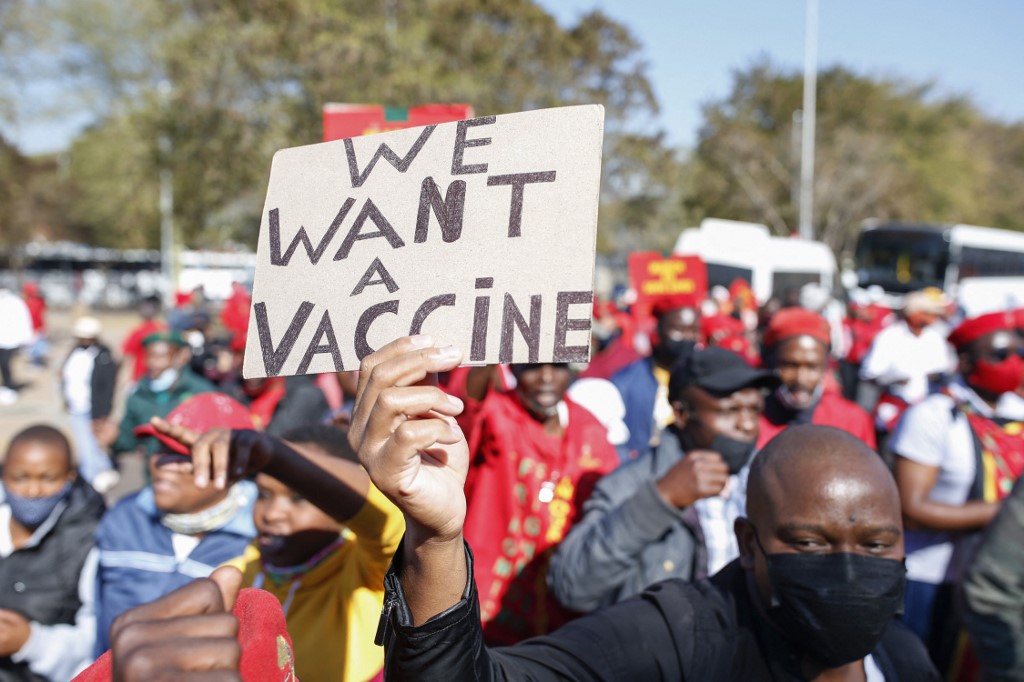 High rates of vaccination and summer weather in the northern hemisphere have given many in the West new hope for the end of Covid-19. It is tempting people to chart new life paths as they glimpse what they believe to be a post-pandemic future. It’s an illusion. The failure of the rich world to help vaccinate developing countries in a manner that matches the West, threatens the very success the rich believe to be at hand. Large swaths of the Global South, including most of Africa, is now in the grip of a new wave of Covid-19 infections. It’s foolish of the West to think it can regain normality when new virus variants will continue to emerge because not enough people around the globe are being vaccinated. A map of well-vaccinated and under-vaccinated nations might draw comparisons to atlases of the early 20th century showing colonial capital countries.

South Africa, the continent’s most industrialized country, is a prime example of the worrying trend underfoot. With the onset of winter in the southern hemisphere and a dismal vaccination rate, it is currently gripped by its third wave of infection, one that is proving to be the most deadly yet. Hospitals in Johannesburg are running out of beds and oxygen as the country battles the Delta variant. There is talk of renewed hard-lockdowns, but no clear plan to fight infections other than to wait out this wave and hope for more vaccines.

It will be a long wait.

One reason is the failure of the Covax vaccine procurement program to achieve its initial goals. Launched a year ago, Covax was heralded as an “unparalleled and ambitious” effort to create a global procurement mechanism to supply Covid-19 vaccines to all countries. Ninety-two of the world’s poorest and middle-income countries were supposed to receive vaccines at no cost. High-income nations would pay for their vaccines through Covax. Together, the two arms of the mechanism were meant to see an orderly roll out of vaccines throughout the world.

Instead, rich nations began to sign deals directly with vaccine makers even before the jabs were ready. And because governments couldn’t be sure which would work, they bought from multiple pharmaceutical companies, reserving more doses than they needed. Meanwhile, Covax began to make concessions to rich countries, letting them choose which vaccine they would receive under the program, and then later letting them purchase enough vaccines for up to 50 percent of their population. Poorer countries, however, would still only get enough for up to 20 percent of their population.

All the above has been the mechanism through which rich nations have hoarded most of the available doses. Ten countries have administered 75 percent of all the Covid vaccines produced so far. It is this that has allowed the West to glimpse the possibility of normality – most often celebrated in social media as the ability to visit a pub or bar for a pint or two; to go on holidays, sometimes abroad; to visit sport arenas and fitness facilities. Meanwhile, in India, South Africa, the Philippines and so on, scenes of actual dystopia persist.

The failure of Covax can’t be explained away by greed alone. An article in the medical journal, The Lancet, explains that “global health experts point to [Covax’s] failure to recognize supply constraints as a major obstacle to global vaccination and emphasize diversifying and scaling up manufacturing from the beginning. This lack of recognition was a serious flaw in the Covax design.”

With Covax much compromised, there are new efforts afoot to supply emerging markets with vaccines. France, commendably so, and the World Health Organization announced on June 22 that they would help South Africa set up a production facility for Covid-19 vaccines. South Africa’s president, Cyril Ramaphosa, said that Africa now understood that vaccines would “never come” from elsewhere in time to save lives. Thus, his country and the continent needed to start producing its own.

He may be right. However, the initiative is going to be too late as a remedy for the current wave of infections sweeping the continent, and maybe even for this pandemic as a whole. Moreover, while South Africa may have the soft and hard infrastructure to build a vaccine facility, most emerging countries don’t.

This, in fact, speaks to a persistence of post-colonial trade protocols that have outlasted formal empires. Seven decades since the beginning of the end of European empires in Africa, the modus operandi remains to buy commodities cheaply from Africa and other ex-colonies and then ship them back as finished products. At best, the Global North’s multinationals might deign to build a factory in emerging economies to take advantage of cheap, low-skill labor. But there has been no rush to transfer enough technology that might have created an indigenous pharmaceutical company able to do high-level R&D in Africa. It is particularly precious of rich nations to say that they are protecting intellectual property, when they feel no compunction about their mining companies, for example, carting off a poor country’s natural resources, ripped out of the ground in a devastating rape of the land.

Understandably then, many Western countries, and indeed many of their citizens, have little problem disregarding the health and well-being of “the rest.” Fair weather friends may have talked up the idea of us all being in one world, like an unending refrain from the Live Aid anthem. But when the chips are down, it’s another story.

Yet, they do this at their very own peril. Faced with a global pandemic that doesn’t recognize borders, no one is safe until everyone is safe. The West – its governments and its peoples – must recognize that the virus raging in emerging countries threatens the global community and threatens them.

International efforts such as Covax spectacularly failed because wealthier nations focused on themselves instead of a global fight. The reality is that the virus will bite back hard through variants currently incubating in countries left with no vaccines. In the absence of sound multilateral protocols, the fight against Covid-19 is bound to go on. In Brooklyn and in London they may think they’ve glimpsed a future free of the virus. But unless that vision becomes manifest in Mumbai, Dakar and Cape Town, too, it’s a mirage.

Covid-19 is caused by a virus. But our inability to adequately and properly confront it comes from a legacy of imperial privilege. This is an even bigger battle we must wage in order to make the future more secure.