Democracy and Revolution in Sudan 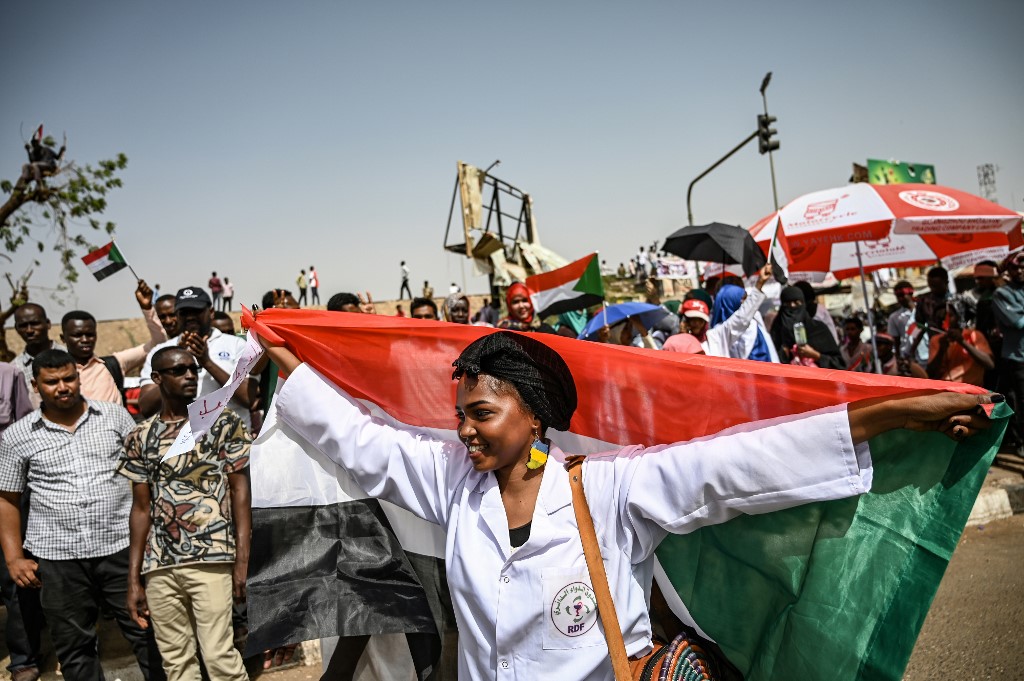 While the dizzying pace of change in Sudan makes it hard to make sense of events, some in the Sudanese opposition have quipped that what has happened, so far, amounts to a “bad coup” followed by a “good coup.” Weeks of popular rage and clashes with security forces finally prompted three top generals to whisper into the ear of Sudan’s Islamist president, Omar Al Bashir, that 30 years of his rule had come to an end, and that he would be confined to house arrest.

Sitting on a throne-like chair, Vice President and Defense Minister Ahmed Ibn Awf addressed the Sudanese nation on TV, informing them  that Al Bashir’s rule had ended, and announcing a transitional period of two years.

Mixed in with the Sudanese people’s jubilation, however, was lingering anger against remnants of Al Bashir’s regime. His longtime companion and vice president, Ibn Awf, was perceived as a placeholder. Less than 24 hours later, Ibn Awf showed up on TV again, this time announcing his resignation, and his appointment of Gen Abdul-Fatah Al Burhan — one of the three generals who had walked in on Al Bashir to depose him — as the leader for the transitional period. Al Burhan is seen as non-partisan, less tainted with Sudan’s endemic corruption and hence a better choice to lead the country through transition.

But not all Sudanese expressed approval of the new leader. Many remain skeptical of the military leading the transition, and doubt that Al Burhan would ever give up power. This skepticism was especially pronounced among the group known as the Association of Sudanese Professionals (ASP), a loose organization of lawyers, engineers, doctors and other professionals, which demanded that the army underwrite a peaceful transition of power, without actually leading it.

Together with a dozen other political groups, which have formed the opposition to Al Bashir, the ASP signed a document that came to be known as the Proclamation of Freedom and Change, which calls for “the formation of a national transitional government,” to consist of “competent patriots, by consensus of all the factions of the Sudanese people.”

The only problem with such stipulations is that implementing them is easier said than done.

Sudan’s proposal for transition is not unprecedented. In Egypt in 2011, where a popular uprising resulted in the fall of Hosni Mubarak, Egyptians, too, offered half-baked ideas for the post-Mubarak period. Novelist Alaa Aswany, one of the most prominent and outspoken proponents of change in Egypt, said the Egyptian revolution committed several mistakes, the first and foremost of which was “abandoning the streets and squares.” Speaking at a panel at a Cairo bookstore to celebrate his book, “Did the Egyptian Revolution Go Wrong?” Aswany said: “We should have formed a commission to represent the revolutionaries and the revolution, from all provinces, in order to achieve the goals of the revolution.”

Like the Sudanese today, the Egyptians in 2011 deposed their sitting president, and expressed dismay at the military leading the transition.

Not only was Aswany opposed to constitutional reform, which the military had put to a referendum, he was also against parliamentary elections, arguing that the military and the Islamists were best prepared to win them. Aswany predicted that the military would snatch victory for presidential candidate Ahmed Shafiq, at the expense of Islamist Muhammad Morsi. But Shafiq lost, clearly illustrating that despite all its might and influence, the Egyptian military did not have it all figured out and planned, as conspiracy theorists would like to believe. Like everybody else, the Egyptian military improvised as events unfolded. Its advantage, however, was that, with the collapse of Mubarak’s regime, it became the only national agency with any kind of legitimacy, even if borrowed from the previous, and hated, regime.

Perhaps heeding Aswany’s advice, Sudan’s protesters held their ground at the camp site, near the military’s headquarters, even after Al Burhan’s takeover. The military tried to disband the camp and restore normalcy, but the signatories on the Proclamation of Freedom and Change refused to let go, perhaps not while Al Bashir is still under house arrest, and can come back.

Justifying its refusal to disperse, the Sudanese opposition said it will only call off its protest if the military hand rule over to a civilian government. The question is, even if Sudan’s military agrees to relinquish power, who can succeed the generals? The people in the street? All of them? Or maybe only a chosen few? And who chooses the few?

Revolutions are romantic and messy. Their success can be measured by the rulers they manage to topple. Yet revolutions are rarely designed to govern nations, post-revolution. The hero of the most successful of revolutions, the American uprising for independence from the British, was himself a general who presided over the country during the first decade after the Americans trounced the British. True, Gen George Washington answered to an elected Congress, but the American democracy preceded its revolution, not followed it. Perhaps revolutions and democracy are, after all, two separate matters.

A high-resolution picture of the author can also be downloaded from our website.