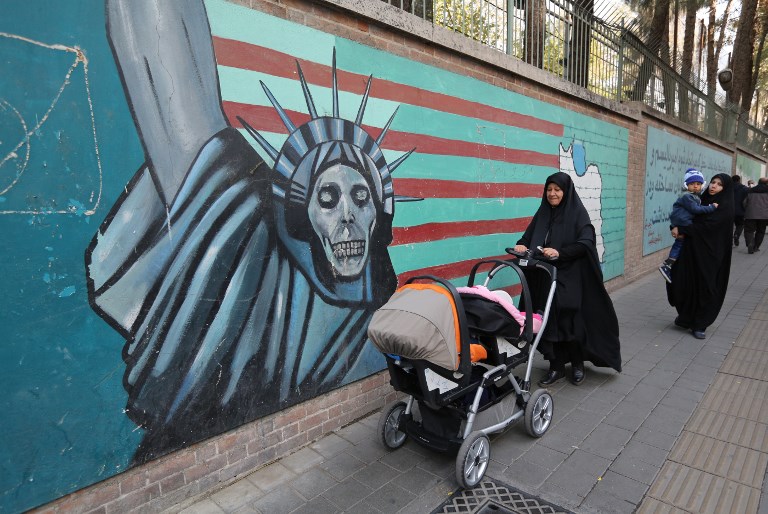 When President Donald Trump trolled Iran by Tweeting “40 years of failure,” his Tweet could cut both ways: Forty years of the Islamic regime have squandered precious Iranian time and resources. Those 40 years have also witnessed American failure in deterring, let alone rolling back, an increasingly belligerent Iran.

A conference held in Warsaw earlier this month was originally designed to be against Iran’s destabilizing activities in the region, but inexplicably morphed into an Arab-Israeli peace conference. In Warsaw, Washington tried, and failed, to score a publicity stunt that would have seen Israeli Prime Minister Benjamin Netanyahu publicly shake hands with participating Arab Gulf officials.

There were no handshakes, and Saudi Minister Adel Al Jubair tweeted that Riyadh’s position on the conflict remains unchanged. Saudis would only shake hands with Israelis in the event of the implementation of the Beirut 2002 Arab Peace Initiative, which would see the establishment of a Palestinian state in the West Bank and Gaza.

And because Washington had tied confronting Iran to the creation of a joint Arab-Israeli front, and because Arab-Israeli normalization did not happen, Warsaw neither achieved peace, nor offered concrete steps on how to deal with Iran’s destabilizing activity in the region.

In fairness, America’s failure in dealing with Iran predates Trump, and will most probably outlast him.

Ronald Reagan hated Iran, but dealt with it through backdoor diplomacy – think, Iran-Contra. Then came Bill Clinton, who believed that together with his Iranian counterpart Muhammad Khatami, he could bring their two nations closer. George W Bush, for his part, placed Iran in the “Axis of Evil,” then deployed Ryan Crocker to Geneva to crack backroom deals with the Iranians over Iraq and Afghanistan. After Bush, Barrack Obama reversed course, and called for unconditional restoration of relations with Tehran, a chance that the Iranians never took. Finally, Trump declared himself to be the toughest president on Iran. All the while, Iran’s policy toward the US has been the same: “Death to America!”

America’s inconsistency was on display in Iraq. After cooperation with the Sunnis during the Surge, the Sunnis managed to eject Al Qaeda. By 2011, America considered the Iraq mission accomplished, and threw the Sunnis under the bus by handing them over to their rivals, Iraq’s Shiite, who did not waste time, and swiftly went after Sunni leaders. When ISIS took over Mosul in 2014, America tried to reconnect with the same Sunni tribes, but none showed up for the war on ISIS. The Sunni tribes that did, ended up working with the pro-Iran Iraqi government, and US influence on the ground became incumbent on Baghdad. In effect, instead of having Sunnis destroy ISIS and regain their territory, America ended up giving air cover to pro-Iran Shiite militias.

Trump promised a smarter and more innovative policy in confronting Iran. His promises, however, turned out to be more bluster than reality.

By insisting on withdrawing 2,000 US troops deployed on Syrian territory east of the Euphrates, Trump repeated Obama’s mistake of abandoning allies on the ground. While Obama unjustifiably let go of Iraq’s Sunnis, Trump is also inexplicably leaving to their fate Syria’s Kurds, who heroically fought ISIS to decimation. When US troops abandon the Kurds, Iran and its allies, such as Lebanon’s Hezbollah and Shiite militias in Iraq, will win a substantial advantage on the ground because, unlike America, Iran is consistent and never abandons its local allies.

America’s inconsistency has offered Iran two advantages. First, no matter how harsh America’s measures are under a certain president, Iran is always certain that the ruler of Washington will change, and that the pendulum will swing from aggressive back to friendly in a relatively short period of time. All Tehran has to do is wait out the president to get a respite from harsh US policies.

Second, America’s inconsistency has kept away allies on the ground, such as governments, tribes and other players. Local actors usually seek long-term, consistent alliances. When a tribe takes on another tribe, there might be blood, vengeance and a feud that lasts generations. Local actors cannot afford to receive intermittent support, and usually hedge for the stronger and steadier power.

Tehran, for its part, could not ask for better adversaries. True, ordinary Iranians are hurting because of US sanctions, but the Islamic regime is immune to poverty and popular misery. Iran can wait out Trump, and America will soon try a new policy, with no guarantees that any of its policies will prevail over the steadier and more consistent Iran. This is no way to run foreign policy – and the Iranians know it.