How Will Oil Producing Countries and Companies Meet the Challenge of Climate Change? 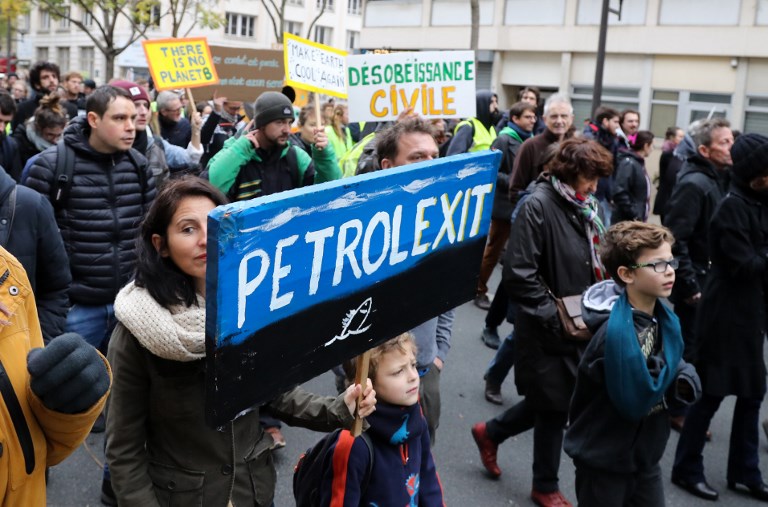 As an organization of the fossil-fuel industry, Opec, meets in Vienna, the United Nations’ COP24 climate talks are taking place nearby in Katowice, Poland. The coal-rich province of Silesia, where sits Katowice, was wrested from Austria by Frederick the Great of Prussia. Now, major oil producers must decide whether to fight the new energy transition or try to annex their share.

All the leading oil and gas players – companies and countries – confront two interlinked challenges. The first, represented by the series of talks that include COP24, the Paris Accord of 2015 and other international climate negotiations, is the growing concern over climate change. The Intergovernmental Panel on Climate Change’s latest report laid out disturbingly the scale of the challenge required to keep the global temperature rise below 1.5 or 2 degrees Celsius, as the Paris Accord requires. Warming to date is already 1 degree Celsius.

And non-fossil fuel technologies are rising in response. Solar and wind power continue to set new records for low cost, the cost of batteries to store renewables’ intermittent output is falling too, and sales of electric vehicles are growing sharply. New designs of nuclear power plants intended to be cheaper and safer than their forebears are also underway.

The leading petroleum producers include national oil companies (NOCs) – such as Saudi Aramco, Qatar Petroleum and Rosneft – and international firms, such as Shell, ExxonMobil and Total. Some, like Equinor (formerly Statoil) of Norway, are largely state-owned but behave mostly like the international firms. The classic NOCs are the repositories of their host country’s hydrocarbon resources, often the dominant driver of the economy, exports and government revenues.

These big hydrocarbon companies and countries can conceive of essentially three future strategies in response to climate change and new energy sources.

They could double down on their current path, aiming to maximise profits before climate limits and non-oil technologies really have an impact. Natural declines in producing fields mean heavy investment in new supplies still will be required even after demand begins to shrink. Countries such as Saudi Arabia and Russia are likely to remain among the world’s lowest-cost suppliers. Investing in refineries in major developing economies, such as India and China, and pipeline links to them, can anchor these suppliers in growing future markets.

Or, they could pursue climate-compatible hydrocarbons. That would involve switching progressively from oil to gas, which emits 25 percent less carbon dioxide when burnt, and is also cleaner and more efficient. Oil and gas can also be converted into petrochemicals, which will continue to be needed in growing quantities. Biofuels are already blended into petrol and diesel, but raise concerns over competing land uses and negative effects on biodiversity.

Carbon capture and storage (CCS) takes emissions from coal-, oil- or gas-fired power plants and industry and disposes of them safely underground, or turns them into useful products such as ceramics or plastics. Oil companies are experts both in injecting fluids underground and in chemical processes. Converting natural gas to hydrogen and capturing the carbon dioxide released would produce a valuable fuel that could be used in home heating, industry and eventually ships and planes.

So far, the American oil firms are largely following the first approach, since the rise of shale oil presents them with an unparalleled opportunity on home turf. A recent change in the US tax code, though, is encouraging firms such as Occidental to expand carbon-dioxide capture to liberate more oil from mature fields.

Most NOCs are pursuing a mix of the first and second strategies. Some of them, such as Petróleos de Venezuela, are barely able to keep their core business alive. But Saudi Aramco probably is the most advanced in growing its petrochemicals activities, with the recent acquisition of compatriot SABIC. Abu Dhabi National Oil Company’s recently announced strategy also includes a major turn to petrochemicals, alongside investments in emerging markets, a new focus on gas and expansion of its CCS projects.

The third path would be radically different: to explore a gradual transition to non-carbon energy, including solar, wind, nuclear, electric vehicles and batteries. Hydrogen made using surplus renewable energy is one area that may fit oil companies’ skills. Applying CCS on a massive scale to the ambient air or to combusted biomass (plant material) to create “negative emissions” – actually drawing down carbon dioxide from the atmosphere – is an essential technology in most of the IPCC’s latest scenarios.

International oil companies (IOCs) have the expertise, people and cashflow to attempt such a transition. Equinor is pursuing offshore wind, which has similarities to its expertise in petroleum extraction at sea. Total has bought into solar and battery companies, while Shell’s “new energies” division is intended to invest $2 billion annually of its $25-30 billion overall capital expenditure, and has invested in electricity marketing that could serve battery cars.

But carbon-free power – from solar, wind or nuclear – is a very different business from producing oil and gas, and already has skilled incumbents. The IOCs have to keep the current, profitable, business model alive while at the same time nurturing a new one – a very tough task within the same organization.

For the NOCs, the dilemma is more acute. Their raison d’être is the stewardship of the world’s largest and lowest-cost hydrocarbon resources, with lifetimes at current production rates of 50 to 100 years. Some may leave the task of low-carbon growth and the creation of new industries to specialist vehicles, such as Abu Dhabi’s Masdar, or sovereign wealth funds.

They can deploy renewable energy at home, but exporting oil and gas remains the key motor of the national economy.

Yet, for the sake of their host countries, the national oil champions need to map out their share of the commanding heights of the new energy economy.