Is Iran and China’s New Strategic Partnership a Game Changer for the Middle East? 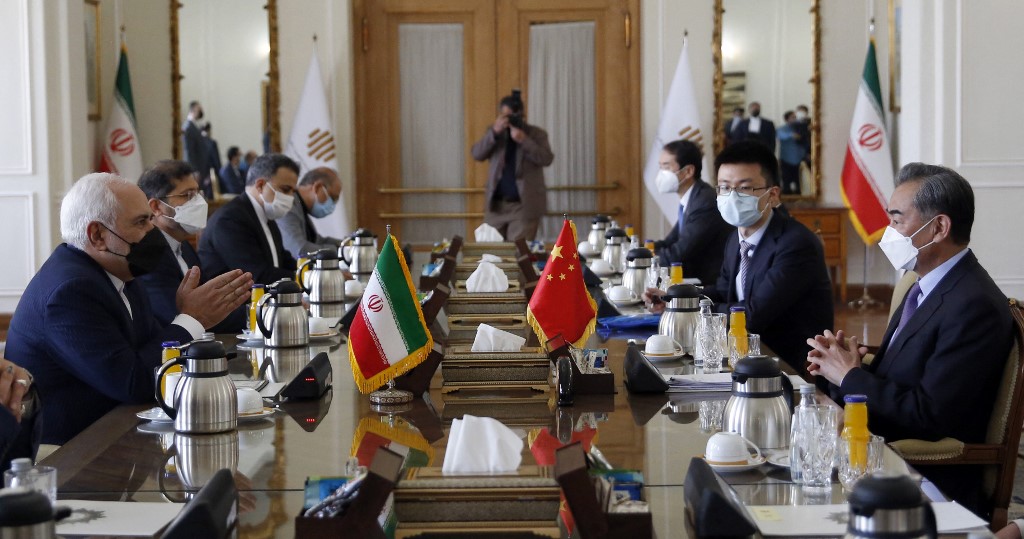 Late in March, the strategic partnership between Iran and China moved to a new phase. It was first launched in 2016 during Chinese President Xi Jinping’s visit to Iran but on March 27, Chinese Foreign Minister Wang Yi signed an expanded version of the 2016 statement in Tehran, pledging bilateral cooperation on political, cultural, security and defense issues, as well as major energy and infrastructure investments with an estimated value of $400 billion over 25 years.

This could be a significant development for the Middle East, challenging assumptions about China’s ambitions in the region, Iran’s ability to pursue its economic interests despite US sanctions and, more broadly, the regional balance of power.

But it’s important to weigh up carefully, even before more details become available, what it is and what it isn’t. Let’s consider first how it could, indeed, be a pivot point for the geopolitics of the region.

China’s leaders think strategically and they may well have calculated that Iran was a long-term prospect, an energy partner and a country of consequence in the region that would enhance China’s influence and access to the economic resources of the country and beyond. Iran’s isolation resulting from UN and US sanctions only made the negotiations process easier, since China’s willingness to trade and invest provides a welcome respite from the pain of multilateral pressure on Iran. Despite Iran’s current weakness, Beijing sees the country as a strategic prize in the long run.

China may also believe that engaging with Iran could mitigate the threat of Iran championing the cause of Muslim Uighurs in western China. Iran has been active in promoting Muslim solidarity with the post-Soviet states of Central Asia which border Xinjiang. Showing respect for Iran and finding activities of mutual interest creates leverage when issues of deep cultural and religious sensitivity arise.

In addition, China may enjoy adding one more partner in its quest to challenge the values of the “liberal international order” created by the western powers after World War II. Iran’s regime is of course quite illiberal when it comes to individual rights and freedoms and would share China’s strong advocacy of non-interference in the internal affairs of sovereign nations.

Yet, Iran was only one stop on Wang’s tour of the region, so it would be wrong to conclude that China has signaled a tilt to Iran over its relations with key Arab states. Wang did vaccine diplomacy in Abu Dhabi and revealed a regional security plan in Riyadh that would try to resume focusing on the two-state solution for Israel-Palestine, among other things. So the wider significance of Wang’s trip is China’s confidence that it can protect its interests with deeper engagement in the region.

Is a strategic agreement with Iran all about the United States? Some observers have been quick to assume that Wang’s visit was intended to convey to the US that Pax Americana is really winding down, that the US has failed to achieve its strategic goals over decades and that the Middle East is one more platform to express strategic competition with Washington. China no longer sees the US as the natural hegemon; the region is “in play” for other outside actors.

But it is also possible that China hopes to demonstrate its growing confidence and influence in the region without causing new harm to its admittedly rocky relationship with Washington. It could explain that its visit to Iran can help bridge the acute differences in US-Iran relations. Certainly, the Biden administration has chosen to emphasize that China and the US share the view that Iran should not have nuclear weapons, suggesting that the big parties can work together to urge Iran to comply with its obligations to the UN. The Chinese might have had a hand in the resumption of talks to fully reinstate the Iran nuclear deal, which occurred very close to the Beijing-Tehran agreement. If China can claim credit, it would be a boost for Beijing’s diplomacy and a gift to the Biden administration, which has been struggling to launch a more productive exchange with Iran.

It’s hard to tell if there’s anything deeply worrying about the security aspects of the Beijing-Tehran partnership. Counterterrorism, arms sales and other bilateral defense issues were probable areas of discussion, but China seems wary of taking on any larger security responsibilities in the region, so far. But watch for port construction projects and ways it can expand its maritime presence as a precursor to a larger role.

For Iran, the drama of Wang’s visit was clear. Iran’s regime most likely felt genuine relief to have such an important visitor, a sign to struggling Iranian society that the country still enjoys respect on the world stage. And the talk of huge sums of investment may have also had an energizing effect on some sectors in Iran.

But unlike the West, Iran’s foreign policy is not structured around Great Power relations, or anything approaching formal alliances, or on US relations with key Asian allies. Iran has a pattern of working as the senior partner in its relations with smaller or weaker Muslim countries, where Iran’s imperial history and its cultural impact on the region are revered and acknowledged. Iran usually is very wary of relations with stronger countries, whether it’s Russia and the United Kingdom over the centuries, or the United States more recently. It is also prone to conspiracy theories about the intentions of outsiders; one should look for signs of Iranian anxiety as well as appreciation for the attention they’ve received from China.

So, for now, it may be best to watch if and how this ambitious partnership comes to life. Many of the recipients of the Chinese embrace through the Belt and Road Initiative have been bitterly disappointed. Perhaps Iran will be the exception and through a robust oil and infrastructure partnership these two countries can change history in the region. Perhaps China will do better than the US at bringing Iran and Saudi Arabia into a more productive modus vivendi, or at resolving the Palestine question. Perhaps China will find the region – Arab nations as well as Iran – receptive to some of its ideas for global governance and regional security. The cumulative effect of these core issues would indeed be a game changer.