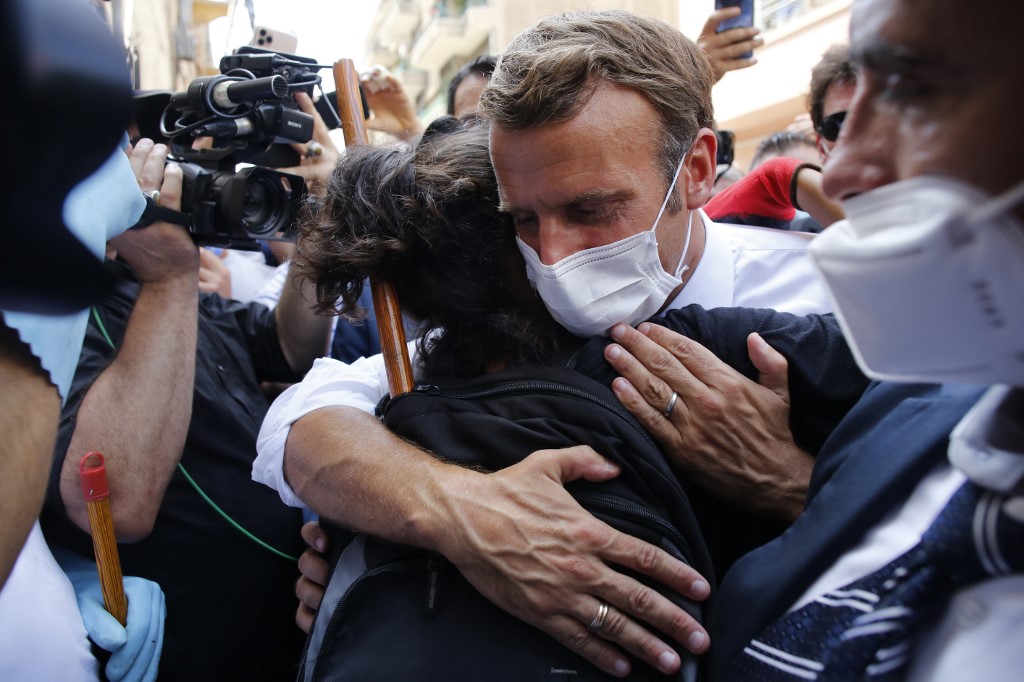 As always, tone is everything. “France will never let Lebanon go,” said French President Emmanuel Macron as he toured a devastated Beirut earlier this month, following the massive blast at the city’s port. Those he was speaking to – a distraught crowd traumatized by an astonishing accident – heard it as the reassurance of a powerful friend. Yet his words had more than a whiff of the unrepentant former colonizer about it.

Nor did the symbolism help. Macron later spoke to the world’s media at a press conference, while Lebanon’s leaders stood behind him, mute behind their face masks. A political allegory, if perhaps an unintended one. The president of France was careful to say that there is “no French solution” for Lebanon, yet his actions tell a different story.

Since his visit, Macron has pushed the Lebanese government to form an interim technocratic government to carry out reforms. He has also apparently expressed his preference for a new prime minister – despite Lebanese parliamentary elections being two years away.

This, then, is the difficulty at the heart of the French president’s sudden desire to help Lebanon. His prescription may be correct – Lebanon certainly does need a new political pact – but he is hardly the man to deliver the medicine. France’s former colonies need more autonomy, not less. It is the Lebanese who are rebuilding their shattered capital from the ground up. It has to be they who do the same for the political system.

In the grief, anger and bewilderment that followed the explosion in the port of Beirut, tens of thousands signed a petition calling for the country to be placed back under a French mandate for the next ten  years. There is no possibility of that, as even Macron acknowledged; yet he has not shied away from presenting himself as the savior of the country.

As well as publicly criticizing Lebanon’s leaders, Macron then, in the manner of an angry headmaster, set them a deadline. When the president of France returns to a former colony to present his “plan” for the country – a country, it should be noted, that has been independent of France for nearly eight decades – it will be on September 1, a deliberately provocative date, exactly a century on from the start of French rule.

There is less than two weeks left. Still, that is enough time for the president of France’s to consult Lebanese civil society on how they see the future of their country; it is sufficient time to canvas the substantial Lebanese diaspora in France on their ideas for reform; and it is sufficient time to come up with proposals to reform or abandon the 1943 National Pact that created the sectarian political system that was brought in during the French Mandate and still plagues Lebanon. It remains to be seen if Macron will take any of those steps to let the Lebanese have a say in the future of the country he plans to “save.”

His“savior complex” is not limited to the Middle East. It has a role to play in the crisis that erupted this month in Mali. In a mutiny on August 18, soldiers arrested the Malian president, Ibrahim Boubacar Keita. For months, the country has been rocked by anti-government protests, calling for the resignation of Keita.

As with Lebanon, France is not a bystander, being both the former colonial power and a current active participant in Mali’s politics. It was a French military intervention in 2013 that halted an Islamist insurgency in northern Mali and paved the way for elections that year that brought Keita to power.

Yet, as the protests continued this summer, Macron conspicuously refused to join in calls from Ecowas, the Economic Community of West African States, a regional bloc, for mediation in Mali. An Ecowas delegation in July saw an unprecedented five West African leaders land in Mali and back a unity government. A signal from Macron that he supported their mediation would have been a powerful sign that France was retreating from its involvement in the region and allowing African leaders to decide Africa’s future. Since then the protests have rumbled on, culminating in Keita’s resignation the day after his arrest, though this does not necessarily mean the end of the crisis.

In that lies the essential issue, which is that France is neither an innocent bystander to the problems of the Sahel and the Levant, nor a recent friend. On the contrary, France has been involved in both regions for decades, and shows few signs of letting go.

This isn’t merely a political problem, but also a temperamental one. For a start, as Macron’s walkabout in Beirut proves, there remains an enormous groundswell of support for France in Lebanon. Part of that is, of course, a response to the incompetence of the current, ageing leadership. But it is also a factor born of the decades of close business interests that bind the French and Lebanese elites. Money and power are strong adhesives. The same is directly true for every former French colony in the Sahel, including Mali.

The second aspect, however, is temperamental. Macron does appear to perceive himself as a leader of last resort, a politician singularly able to get things done when others fail. The flip-side of that belief is that he rarely allows others to try.

When he was first elected president, Macron let it be known that he saw himself as a “Jupiter” figure, ruling like the Roman god above the political fray. The French public soon wearied of that pose, as no doubt the Lebanese will. Lebanon doesn’t need the Mandate back, it needs the effects of the Mandate ended, and unpicking those strands is more than one person – however energetic – can manage. Macron’s savior complex won’t be enough to save the complexity of that – or any –country.