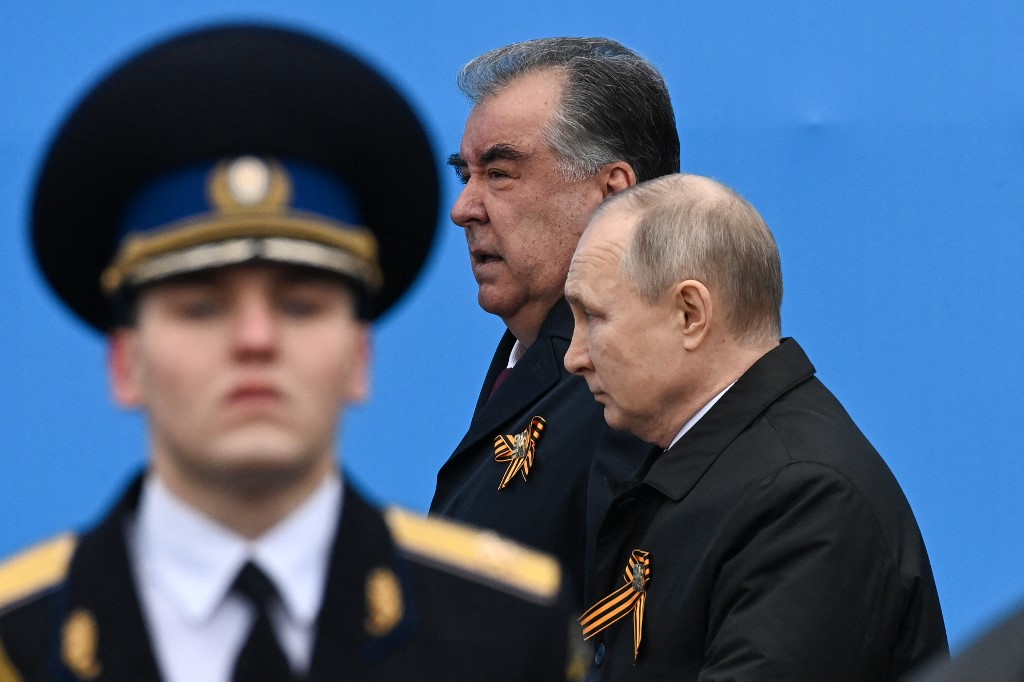 With a growing hub of Afghan resistance figures and political exiles, Tajikistan has emerged as the primary foreign power ready to face down the new Taliban government. Reports of a push to form an alternative Afghan administration in the Tajik capital Dushanbe will only deepen hostilities between the neighbors. Since the Taliban stormed Kabul, the militant group and Tajikistan have not lost time in trading threats. The Taliban accused Tajikistan of interfering in the internal affairs of Afghanistan, and moved its special forces to their vast shared border. Tajikistan had already deployed 20,000 additional troops to the frontier, and conducted a nationwide military drill involving 230,000 service personnel. While a full-scale military confrontation remains unlikely, the tensions allow Russia to exert further influence over the region through a mediation role between the former Soviet republic and Kabul’s new rulers. Meanwhile the saber rattling from Tajikistan also reflects the domestic position of long-serving president Emomali Rahmon.

Tajikistan is one of the few neighbors of Afghanistan that has openly stated it does not intend to recognize a Taliban government “formed through oppression.” President Rahmon has repeatedly criticized the Taliban for their actions and demanded more rights for Tajiks in Afghanistan – the largest ethnic group in the country after Pashtuns. Tajikistan has also made no secret of its support for the National Resistance Front of Afghanistan, the only force opposing the Taliban in Panjshir province. The majority of the population of Panjshir, a gorge that stretches for 130 kilometers and is the home of resistance leaders, is also ethnic Tajik. After the Taliban launched an assault on the valley, resistance leader Ahmad Massoud and former vice president Amrullah Saleh fled their final holdout for Dushanbe, where they joined a growing number of Afghan exiles plotting their next steps.

Complicating matters for president Rahmon, however, is that not all Tajiks look to Tajikistan for support. A number of Afghan Tajiks have already sided with the Taliban, and authorities in Dushanbe fear that Afghanistan’s new rulers could use Jamaat Ansarullah – a militant group founded in Afghanistan by Tajik national Amriddin Tabarov in 2010 – as a force against Tajikistan.

Tajik officials said on several occasions that some of the Taliban-controlled gangs, consisting of ethnic Tajiks, are “ready to invade Tajikistan.” The Taliban rejected such reports, saying that no group would be given permission to launch an attack on any of Afghanistan’s neighbors.

Not surprisingly, Tajikistan does not seem to trust the new authorities in Kabul. In a clear message to the Taliban, the country recently conducted joint military exercises with its ally Russia and other members of the Collective Security Treaty Organization (CSTO) along the 1,400-kilometer Tajik-Afghan border.

Tajikistan is Afghanistan’s smallest neighbor and the poorest country in Central Asia. As such, it represents a relatively easy target for the Taliban. Still, the Afghan group is unlikely to attack a CSTO member, as it would have a serious impact on relations with Russia.

Tajikistan’s tough position regarding the Taliban was almost certainly coordinated with Moscow, although the Kremlin seems to play a double game in Afghanistan. Russia held several meetings with Taliban leaders, and unlike many Western countries, it never closed its embassy in Kabul. Yet the Kremlin still refuses to remove the radical group from its list of terrorist organizations, let alone to recognize the Islamic Emirate of Afghanistan. Moreover, Russia is actively arming Tajikistan and sending additional troops and military equipment to its base there.

Unless tensions between Tajikistan and the Taliban escalate and lead to military confrontation – which does not seem very probable at this point – Russia will likely try to act as a mediator. Such a policy could allow Moscow to additionally increase its influence in Central Asia, and at the same time to become one of the key players in the post-American Afghanistan. If, however, the Taliban or their proxies eventually launch an incursion into Tajikistan, Russia would have no option but to provide full support to its ally.

For the Kremlin, a destabilization of Tajikistan could have a serious impact on Russia, which is the major destination for Tajik migrant workers. More importantly, Russia has a Muslim population of 25 million, and has an interest in them following a traditional form of Islam, rather than an extreme version like the one fueling the Taliban. That is why Moscow strongly supports Rahmon and his policy of active secularism in Tajikistan.

The Tajik leader, for his part, is reportedly preparing the ground for the transfer of powers to his son. Until Rustam Emomali, or some other figure, takes the helm of the country, Emomali Rahmon – who has ruled Tajikistan for 30 years – will unite the Tajik people against “the Taliban threat.” That is why Dushanbe will continue to openly support opponents of the Taliban. Quite aware of that, Ghani Baradar, the Taliban’s acting first deputy prime minister, accused Tajikistan of interfering in Afghan internal affairs, pointing out that “for every action there is a reaction.”

Indeed, Tajikistan firmly insists on the formation of an inclusive government in Kabul, which would protect the interests of ethnic Tajiks in Afghanistan. Until such a government is formed, Tajikistan is expected to keep treating the Taliban as a terrorist organization, and tensions between Dushanbe and Kabul will remain high.