The Middle East Needs to Step Up Help for Amputees 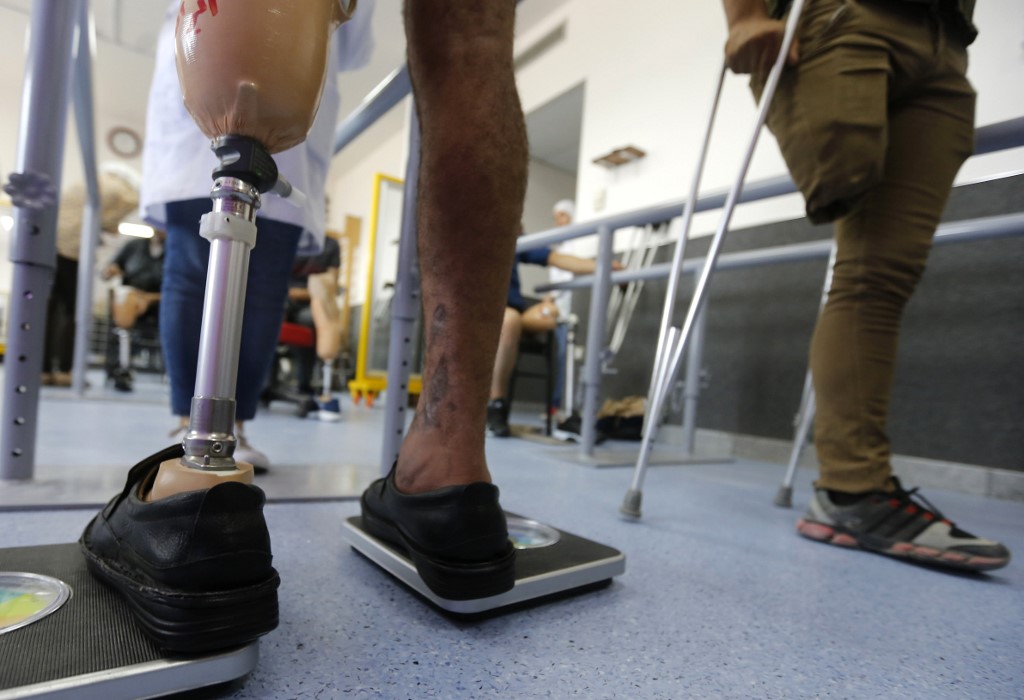 A girl who only wants to hug, but can’t. A boy who just wants to play football, but can’t. An elderly man who just wants to wear his favorite lace-up shoes, but can’t. What they all have in common is that they have lost limbs. The little girl lost both arms in a rocket attack on her neighborhood in Syria. The young Yemeni boy was chasing a ball into bushes when a landmine went off, taking his legs. And the elderly gentleman is a Saudi who lost his foot to gangrene arising from diabetes.

The poet TS Eliot described April as the cruelest month, which makes you wonder if that’s why it is designated as Limb Loss Awareness Month. But perhaps cruel also because even with an entire month dedicated to the cause, as each April ends, precious little awareness seems to have accrued, despite the heroic efforts of the Amputee Coalition, which launched the annual campaign 33 years ago. (Yes, it really has been that long).

In the US, there are more than two million people living without a limb. Unfortunately, there are no reliable figures for the Middle East but news reports from a region riven by war over the past few decades indicate they are in the hundreds of thousands. In 2017, the World Health Organization reported that more than 86,000 Syrians had suffered wounds that necessitated amputation. The Damascus Center,  a rehabilitation facility run by the Syrian Red Crescent which supplies locally-made artificial limbs, doubled its output of prosthetic limbs from 250 in 2014 to 500 in 2018 and has been churning out 50 a month since last May.

Unfortunately, appealing for help for the limbless can be a “hard sell,” as NGOs trying to help amputees the world over have found. There is no cure for losing a limb. There is only making the best of a bad situation and the best is not universally available — not in poorer countries and certainly not in war zones. So the amputees, including children, have to make do with cheap, ill-fitting prosthetics which chafe painfully at their wounds, causing bleeding and infections — a fact of life for the limbless, of which few of us are even aware.

State-of-the-art prosthetics are expensive and the NGOs working with amputees are woefully short of funds. Without financial support from either the state or the private sector, they cannot afford, for example, the $40,000 and more it costs for a robotic full replacement leg. And it was deeply shocking for me to learn — as I did recently when making inquiries for a loved one — that health insurance companies often will not cover the cost of buying and fitting prosthetics,  not to mention the cost of rehabilitation and any counselling that may be needed (amputation affects family members too). This is true even for those who have the highest level of health insurance. To add insult to injury, some insurance companies even justify their refusal to provide coverage on the grounds that prosthetics are “cosmetic.”

In 2004 I interviewed a young Iraqi who worked in bomb disposal, who had lost both arms while attempting to defuse a car bomb. He was the only casualty in the explosion. Lying in his hospital bed, he overheard his weeping wife describe him as “half a man.” As he fought back the tears that he could not wipe away, he insisted, “I would do it again. I saved a neighborhood. That is what real men do.”  It took years for him to get the advanced prosthetics he needed and even then it was possible only through donations from the very people he saved.

Of course, not all amputations occur because of war. Some people lose limbs because of accidents or health reasons. One of the most serious health issues facing the Arab world and, in particular, the GCC countries is diabetes.

In Saudi Arabia diabetes is responsible for 5,000 foot amputations annually, according to figures released last summer by the International Diabetes Federation. A paper published in 2017 in PLoS One, the peer-reviewed scientific journal published by the Public Library of Science in the US,  predicted that the rate at which Type 2 diabetes in the GCC countries has rocketed in the last 20 years suggests the number of cases will almost double again by 2035. The problem is compounded by a lack of expertise in specialized wound care, especially with regard to diabetics’ feet, which could prevent some amputations.

At the Special Olympics recently held in Abu Dhabi, disabled athletes spoke about living a full life despite losing a limb. Prosthetics are improving all the time. A  basic robotic hand costs around $4,000 but a prosthetic can be made on a 3D printer for a tenth of that price. However, for those living through war and in poverty, $400 is still a sum beyond their reach. Helping them also remains beyond the capabilities of NGOs, unless they receive meaningful and sustained financial support.

Every amputee I have met insisted they do not want to be pitied or feared or labelled. They do not want people to feel uncomfortable around them. What they desire above all else is the chance to be a complete functioning person, to be as whole as they can be.

For that to happen, the limbless need their own hero, a powerful champion who can take on their cause and create an umbrella for the small NGOs working in the Mena region who are trying hard to make a difference with very few resources.

Yes, it will take money — a great deal of money. But the impact and rewards are priceless. And it starts with you, with awareness.