To Stop Being Plagued by Locusts, Mankind Must – Ironically – Copy Locusts 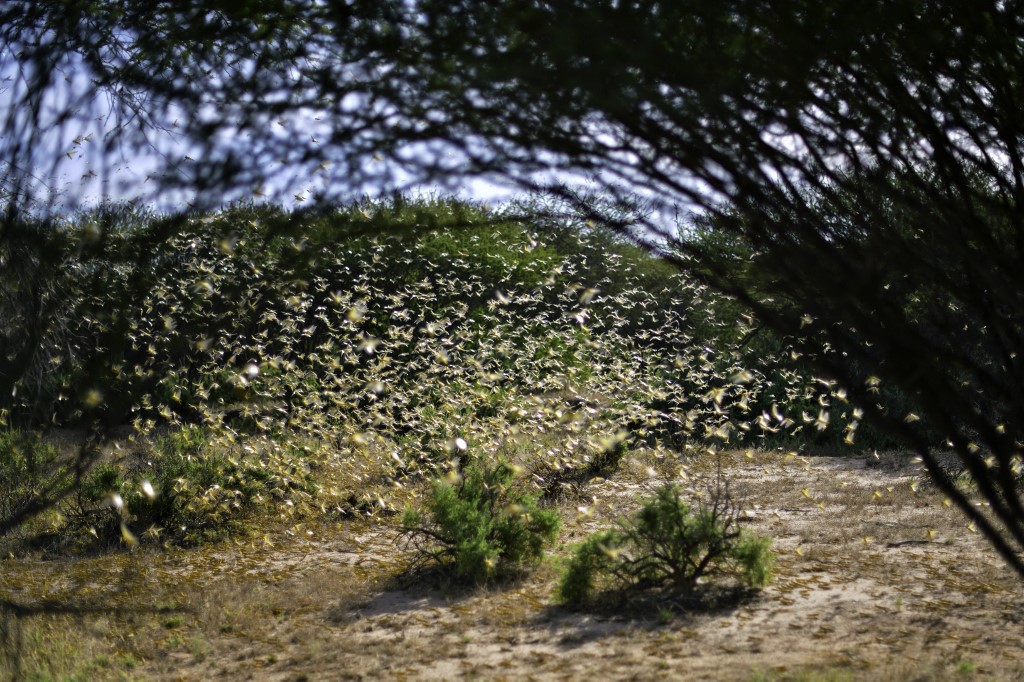 There’s a good reason why the locust is invoked in both the Bible and the Quran as the ultimate expression of God’s vengeance. Since time immemorial the desert locust has fed upon the toil of countless generations of farmers across the Middle East and North Africa. It is doing so right now in the Horn of Africa; the UN’s Food and Agriculture Organization has warned of yet another “extremely alarming” plague of locusts.

The source of this latest onslaught was not only predictable but in fact was predicted in the Old Testament Book of Exodus, which scholars believe was probably written between the 6th and 5th centuries BCE. Exodus relates that Moses “stretched out his staff over Egypt, and the Lord made an east wind blow across the land [and] by morning the wind had brought the locusts,” which promptly “devoured … everything growing in the fields and … on the trees.”

It is the east wind that has brought the specter of famine now, too. In other words, we should have seen it coming. As well as historical precedent, the biggest clue was in the recent extraordinary weather patterns experienced in the traditional breeding grounds of the locust swarms that are now threatening to bring starvation to Kenya, Ethiopia, Tanzania, Somalia, Uganda and South Sudan.

Many of the swarms originated across the Red Sea, mainly in the Rub’ Al Khali, the vast Empty Quarter desert shared between Saudi Arabia, Yemen, Oman and the UAE, but also in southern Iran and parts of India and Pakistan. A series of tropical storms originating over the Indian Ocean drenched the usually arid breeding grounds and caused locust populations to grow thousands of times bigger than normal.

Nature would normally rebalance such a growth spurt as the desert dries out and the vegetation dies off. But the weird weather patterns have proved to be the locust’s friend. The unprecedented rainfall not only creates ideal conditions for egg laying but also causes normally scarce desert vegetation to burst into life, providing a plentiful food source.

Locusts are vulnerable when they are just eggs in the ground but they are hard to spot. When they hatch into masses of what are called hoppers, they can be dealt with easily. The problem is that such colonies are often in remote areas where there is very little incentive for the host country to deal with them. Soon, they will move on and become someone else’s problem.

After hatching, the hopper still cannot fly and remains an essentially solitary creature. It becomes gregarious only after it has fledged, taking to the skies en masse and riding the easterly winds to fresh pastures, just as it has since ancient times. Swarms can vary in size from one square kilometer, consisting of about 40 million locusts, to several hundred square kilometers. With each locust consuming roughly its own weight – two grams – in fresh food per day, a modest one square kilometer swarm will eat as much in a single day as about six elephants, 20 camels or 35,000 people.

A swarm can cover up to 130 kilometers in a day and stay in the air for many days at a time, so the Red Sea – which is barely 300 km across at its widest point – presents no barrier. In 1988, one swarm took only 10 days to migrate 5,000 km across the Atlantic.

If conditions are right, the cycle begins again when the swarm reaches its new destination. The FAO warns of “widespread hatching and band formation” in the coming weeks in Kenya, Ethiopia and Somalia. At the same time “above-normal breeding continues along both sides of the Red Sea coast” and new swarms are forming in the highlands of Yemen, parts of northwest Pakistan and along the southern coast of Iran. The FAO predicts there will be “an unprecedented threat to food security and livelihoods” in the Horn of Africa by March.

Mankind is immeasurably more knowledgeable now than in the days when those first written accounts of the devastating impact of locusts were recorded. So why have we not defeated the desert locust?

Killing locusts isn’t difficult. The primary method is to poison them with insecticides, using aircraft, vehicles or even hand-held sprayers. Cruder methods, such as a blast from a flame-thrower or burying hoppers in ditches, also work. All of this, however, requires funding and cooperation between the countries where locusts breed and the countries where they fly to and cause devastation.

According to the FAO, the failure to combat the locust mainly comes down to one reason: mankind’s own inability to “swarm” and – unlike the locust – to act as one in common cause. The remoteness of many of the areas where locusts thrive is certainly a big obstacle but so is the insecurity of such areas caused by conflicts and “political relations amongst affected countries.”

In other words, beating the desert locust requires humans to do something we are notoriously bad at: transcending petty local differences and working together for the common good.

The plague of locusts is generated by the changing weather patterns that too many people in power still refuse to acknowledge. It should serve as an early warning of things to come. Tragically, however, it will probably prove to be just another expression of nature’s vengeance that we chose to ignore until it was too late.