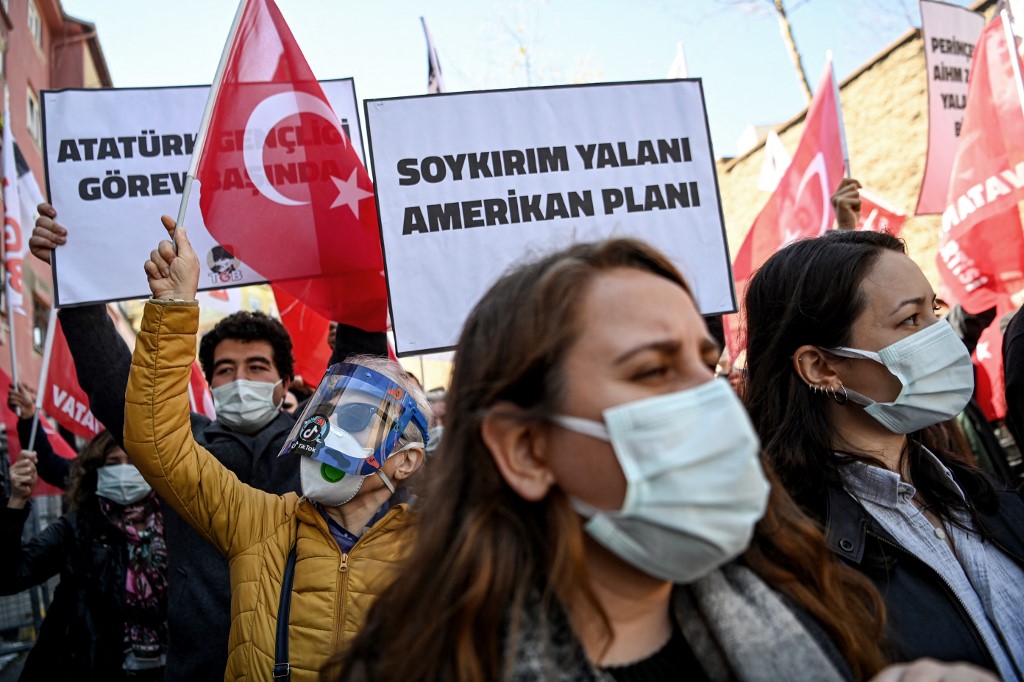 On April 24, the once-unthinkable happened. Marking the 106th anniversary of the Armenian genocide, US President Joe Biden issued a statement that explicitly used the word “genocide” twice. The statement marked a reversal of decades-long American policy to avoid officially recognizing the Armenian genocide in order not to antagonize Turkey, long a valuable Cold War and later Middle East ally. After years of declining relations, however, Turkey’s standing in the eyes of US policymakers had fallen to the point where alienating Ankara was no longer seen as a non-starter. Biden thus decided to keep his campaign promise and issue the recognition, to the jubilation of half a million Armenian Americans.

Turkey’s long campaign of genocide denial, then, has failed – at least in its primary foreign policy goal, which was to prevent US recognition. Despite this, there are too many reasons, both domestic and international, to think Ankara will allow a softening of its stance on the genocide (or the “events of 1915,” as Turkey calls them) to occur anytime soon.

Still, one of the surprising developments following the recognition was the reaction, or rather lack thereof, from the Turkish government itself. The Turkish foreign ministry naturally followed the declaration with a statement denouncing Biden’s recognition as an effort to “rewrite history,” and Turkish President Recep Tayyip Erdogan called the development a “wrong step” that he urged Biden to reverse. Other than this, there were few concrete steps taken at all. The US ambassador to Ankara was summoned for consultations, but no other threats were issued, and even the tone of the government’s statements was relatively measured. Facing a protracted economic crisis exacerbated by yet another devastating Covid-19 swell, Turkish leaders took care not to further upset markets by reacting harshly to Biden’s announcement.

Views on the genocide in Turkish politics and society, meanwhile, are so deeply rooted that taking any opposite stance would incur a heavy political cost. Reactions among Turkish politicians demonstrated this aptly, highlighted by statements such as that of the member of parliament Umit Ozdag (from the nationalist MHP party, a coalition partner of Erdogan’s AKP), who took to Twitter to praise Enver and Talaat Pasha – the architects of the genocide – in a statement saying that “we would do it again.” More broadly, all of Turkey’s parliamentary factions, with the notable exception of the Kurdish-led HDP, condemned the US recognition. Turkish public opinion, shaped by decades of denialist education, is also in line with this: a 2015 poll found that only 9 percent of Turks believed that the massacres of Armenians during World War I constituted genocide.

Beyond Turkey’s borders, the most notable voice on the issue from any of Ankara’s regional partners takes an even harder line than Turkey itself. Azerbaijan, whose ties with Turkey have risen to new heights over the past year and culminated in Ankara’s military and diplomatic support during the 2020 Nagorno-Karabakh war with Armenia, takes an anti-Armenian line as its overriding policy outlook. For Azeri President Ilham Aliyev, who was the first foreign leader to speak with Erdogan following the US recognition, Armenia is a country “not even worthy of being a servant.” With Erdogan set to visit Shusha (recaptured by Azerbaijan in November, in the heart of Nagorno-Karabakh) in the coming months, the Turkish president will doubtlessly preside over many more stridently anti-Armenian speeches in the near future.

It’s also not clear what Turkey would have to gain even from Armenia itself that would necessitate any such politically costly concessions on the issue of the genocide. Over the past few months, it has been widely reported that Turkey is preparing to open its long-closed border with Armenia, something stipulated in the November 10 ceasefire agreement (the “unblocking of regional trade and economic links”) that ended last year’s war and hinted at by Erdogan advisers themselves. Given the overwhelmingly negative image of Turkey in Armenia, particularly in the wake of its support for Azerbaijan in the war, any restoration of links with Ankara would be deeply unpopular for the government of Prime Minister Nikol Pashinyan in Yerevan. Nevertheless, Turkey could merely decide to unilaterally open the border – something that seems increasingly plausible, given that Russia (the arbiter of the November 10 ceasefire deal) would love to have a direct rail link with Turkey via Azerbaijan and Armenia. In that case, there would be little the Armenian government could do but acquiesce to the opening – concessions on the genocide issue or not.

In the meantime, all of these matters are likely to play second fiddle to domestic considerations. As Turkey historian Howard Eissenstat recently pointed out, the Armenian genocide is simply too close to the Turkish republic’s founding for Turks to grapple with honestly without a “fundamental rethinking” of the country’s creation narrative. But Turkey, too, will get over it. The US is hardly the first country to recognize the genocide, and many of those who have – Russia and Germany chief among them – constitute Turkey’s most important international partners. Ankara’s rhetoric might not change, but life, as it always does, will go on.