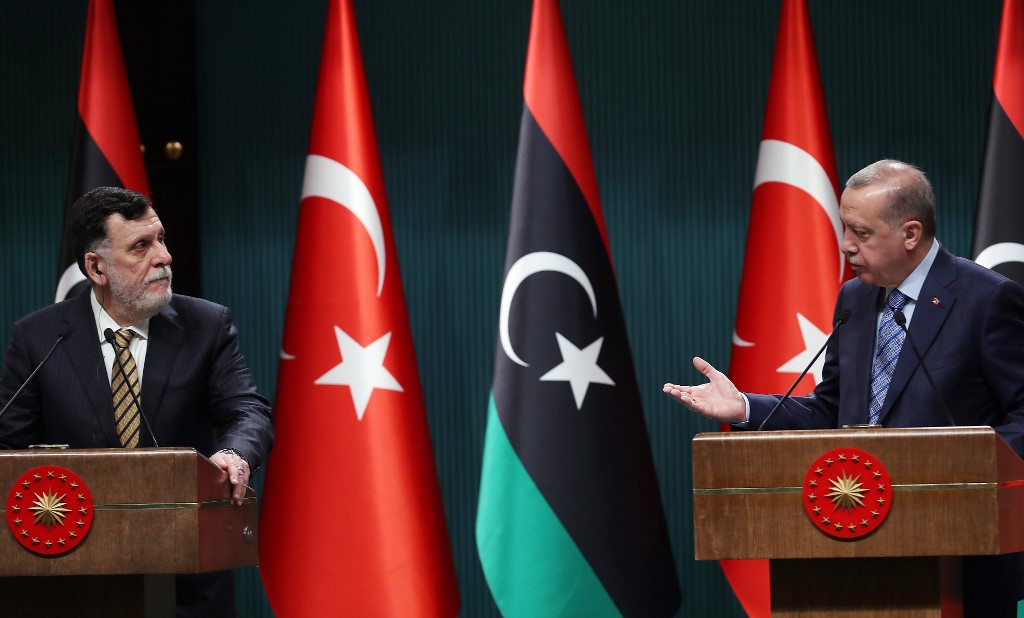 Turkish President Recep Tayyip Erdogan gambled big in Libya and won big – so far. This victory portends important changes in the politics of the Mediterranean, for Turkey has succeeded not only in demonstrating its determination to become the dominant player in the Eastern Mediterranean, but also in showcasing its military prowess and wherewithal. The latter might precipitate a deeper conflict and crisis in the region, extending north toward Greece.

Erdogan threw his support behind the UN-recognized Government of National Accord (GNA) against General Khalifa Haftar’s Libyan National Army (LNA), which had besieged the GNA’s capital, Tripoli. Haftar suffered a humiliating defeat as Turkish drones, troops, navy vessels and some 10,000 Syrian fighters transported by Ankara to Libya stopped him in his tracks and then forced him to abandon bases and territory. A last-minute call for a ceasefire by Egyptian President Abdel Fattah El-Sisi was rejected by the victorious GNA, which has set its aims at capturing other towns, including the critical port city of Sirte.

Indirectly, this was also a defeat for the countries that had backed Haftar: Egypt, the UAE and Russia. The UAE had contributed military equipment and the Russians non-state mercenary forces.

Turkey’s Libya expedition has to be seen from two perspectives. First, the GNA concluded a deal with Ankara that delineated their respective Exclusive Economic Zones (EEZ) in such a way that it divides the Mediterranean Sea into two sections. Turkey’s purpose is to hinder efforts by Egypt, Cyprus, Israel and Greece to export natural gas, either through a pipeline or on LNG vessels, to Europe. Turkey has aggressively interfered with efforts by these to drill for gas. Ankara claims that most of the waters around Cyprus actually belong to Turkey or to the Turkish Republic of Northern Cyprus, a country recognized only by Turkey.

However, more important than simply preventing Eastern Mediterranean gas exports is the underlying strategy driving this push against Haftar. From the moment he assumed power in 2003, Erdogan has striven to elevate Turkey’s international role to that of a regional, if not global, power. Initially, his strategy was one of “zero problems with neighbors,” which served to emphasize Turkey’s soft power. The primary driver, however, was the desire for Turkey to assume a hegemonic position over the Middle East. This policy foundered and was essentially buried by the Arab Spring.

What has replaced it is a more aggressive and militarized posture that takes the fight to perceived enemies. That could mean anyone and everyone, since Turks tend to see most countries as a threat, even if they are allies. Before Erdogan, Ankara pursued defensive strategies. Under Erdogan, Turkey has intervened in Syria against the Assad regime and again against the Syrian Kurds who are allied with the United States. Turkish troops and their Syrian Islamist allies have occupied two Kurdish areas in northern Syria with the ultimate intention of constructing a Kurdish-free buffer zone. The only reason it remains uncompleted is because a small American force is still there working with the Syrian Kurd-led Syrian Democratic Forces. Even so, and against advice from his aides, at no point has President Donald Trump opposed Erdogan’s moves in Syria.

In the Mediterranean, however, it is clear that Erdogan has now adopted a strategy developed by arch-nationalist army officers, called the “Blue Homeland.” As a first step, this new doctrine envisages the domination of the Aegean, of most of the Mediterranean and of the Black Sea. To this end, Turkey has invested in expanding both the size and sophistication of its navy.

Turkish victories in Syria and Libya have been made possible by Washington and Europe’s unwillingness to stand up to Erdogan, which only feeds his sense of invincibility. This week, he launched airstrikes against Turkish Kurds and their affiliated groups in Iraq. Erdogan might follow up these moves with a land invasion of northern Iraq.

There are two real dangers ahead. The first is a possible confrontation with Greece which, like Turkey, has been a member of Nato since 1952. The Blue Homeland doctrine makes it clear that Turkey does not recognize the post-World War I arrangements over the Aegean. Turkey claims many Greek islands and Greece’s EEZ. There have been hints about drilling for gas near the Greek island of Crete. Flushed with confidence after his victories in Syria and Libya, Erdogan may well decide this is a good time to challenge Greece, especially as such an exploit would play well at home.

The second danger lies in Libya. Turkey makes no secret of wanting to establish a naval and an airbase on Libyan territory. Along with any attempt to expand the GNA-controlled zone by moving toward Sirte, these bases could trigger a more forceful Egyptian reaction, possibly supported by Algeria and even the Russians.

The Europeans, especially the French, are alarmed at the presence of a large contingent of Syrian Islamist fighters brought to Libya by Turkey. The memory of jihadi terrorism in France – not to mention the continued struggle to contain similar insurgencies in West Africa – has provoked strong criticism of Erdogan from President Emmanuel Macron.

A new crisis, therefore, is brewing and unless Washington starts paying attention, it could mutate into yet more, wholly avoidable, long-term discord.

Henri J Barkey is the Cohen Professor of International Relations at Lehigh University and an adjunct senior fellow for Middle East studies at the Council of Foreign Relations. Among other roles, he previously served as a member of the US State Department’s Policy Planning Staff, working primarily on issues related to the Middle East, the Eastern Mediterranean and intelligence.