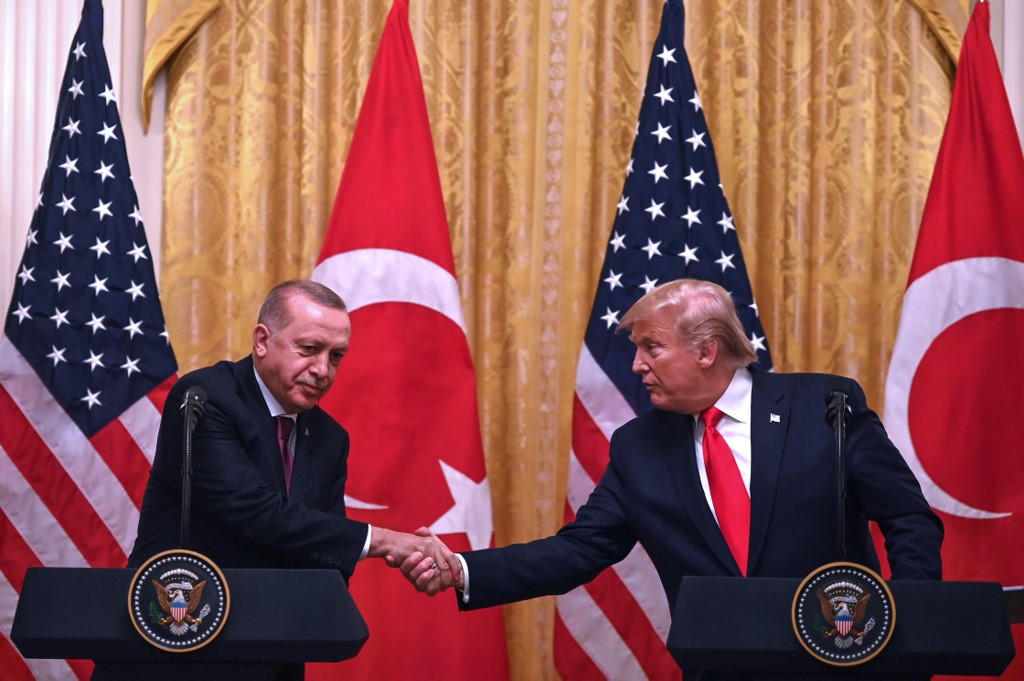 Turkish President Recep Tayyip Erdogan received a warm welcome at the White House on Wednesday. But this facade of good relations between the two countries is highly deceiving. Indeed, any sense of victory Turkey might claim from the outwardly friendly visit with Donald Trump is an illusion. In reality, the two countries are wide apart on substantive issues and the two presidents are very lonely at the top.

The media, public opinion, national security establishments and legislators in each country are highly antagonistic toward the opposite state. Turkey has had dismal public relations in the United States after its military incursion into northern Syria. In an extremely polarized Congress, anger against Turkey is probably the only bipartisan issue left. There is strong momentum in the Senate to pass a resolution, already approved by the House of Representatives a couple of weeks ago, that will strongly sanction the Turkish economy and defense sector over Ankara’s purchase of a Russian missile-defense system. In fact, the talks between Trump and Erdogan in the Oval Office were focused almost exclusively on this contentious issue.

There is no doubt that the S-400 missile-defense system now has replaced the Kurds in Syria as the main issue further poisoning strained ties between the two NATO members. Trump is believed to have tried hard to convince Erdogan to declare he would not activate the S-400 system. The presence of heavyweight Republican senators, such as Lindsey Graham, at the meeting was also highly unusual and a stark reminder of the growing role of Congress in matters related to Turkey.

Erdogan probably didn’t need the reminder. After all, he will know all too well that the Armenian genocide resolution and heavy financial and political sanctions were approved by the House of Representatives with an overwhelming majority. While Graham declared he would not bring the genocide resolution to the floor of the Senate, he made no such commitment about the more important threat of economic and military sanctions.

Equally important is the fact that Turkey is now part of the domestic impeachment debate in American politics.  On the day of Erdogan’s visit to the White House, The Washington Post and The New York Times both ran deep-dive, front page stories questioning Trump’s investments in Turkey. There is now pressure on Democrats to include Turkey, in addition to Ukraine, in the impeachment hearings. It was not lost on anyone that even John Bolton, Trump’s former national security advisor, suggested that the president’s reluctance to punish Erdogan after the purchase of the S-400 system was motivated by personal or financial interests.

These dynamics do not bode well for an American president who welcomed Erdogan on the day impeachment hearings began in public. So, in case Erdogan still believes Trump will continue to protect him from the ire of American legislators, he should think again. As such, Ankara should recalibrate its strategy and diversify its portfolio in Washington beyond just the White House. Reaching out to the Senate, with the message that Ankara is open to reconsider the activation of the S-400 system, would be a good start.

But Erdogan made no such commitment because he is currently more concerned about not alienating Putin’s Russia than making nice with Trump’s United States. Putin can get nasty with Turkey very fast by bombing Idlib province, thereby unleashing millions of new Syrian refugees on to the Turkish border. The fact that Turkish public opinion has turned decidedly anti-American also helps Erdogan. In the eyes of an overwhelming majority of Turks, the US is the top national security threat, mainly because of Washington’s support for Syrian Kurds. The fact that Washington refuses to extradite the Muslim preacher, Fetullah Gulen, who some consider to be the mastermind of a bloody coup attempt in 2016, is another major irritant.

Moreover, Erdogan’s defiance of the US and his decision to send the Turkish army to crush the burgeoning Kurdish federation across the border in Syria received the enthusiastic support of the whole political spectrum, including the center-left secular opposition. Nationalism is indeed Erdogan’s most powerful weapon and he is using it effectively to undermine the unity of the opposition, which is anyway composed of strange bedfellows such as the pro-Kurdish Peoples’ Democratic Party, the rightwing anti-Kurdish Good Party and the secular Kemalist Republican People’s Party. Mobilizing Turkish nationalism is the best antidote to this eclectic opposition. Given the state of the Turkish economy, which is suffering from high unemployment, high inflation, a weak currency and high private-sector debt, makes very plausible the argument that Erdogan launched the Syria incursion to divert attention from his domestic problems.

In addition, anti-American sentiment is running so high that Erdogan himself had to carefully calculate the pros and cons of a visit to Washington. Under normal circumstances, the cumulative impact of the infamous and highly undiplomatic letter Trump wrote to Erdogan (warning him not to be “a tough guy”), the Armenian genocide resolution and the threat of economic and military sanctions should have convinced Erdogan to snub Trump’s invitation to the White House. He would then play the national pride card with a rally-around-the flag strategy at home. Many Turkish pundits even claimed that Erdogan was planning on calling early elections to capitalize on the momentum the Syria incursion created.

By coming to the White House, however, Erdogan has opted for the long game. He wants to play the role of grand strategist and dexterous statesman who can juggle both Putin’s Russia and Trump’s America in pursuit of Turkey’s national security interests. Or at least that’s what he’s hoping for; only time will tell if it works. For now, however, the economy remains weak and looming US sanctions threaten to make Erdogan’s warm welcome by Trump a pyrrhic victory.