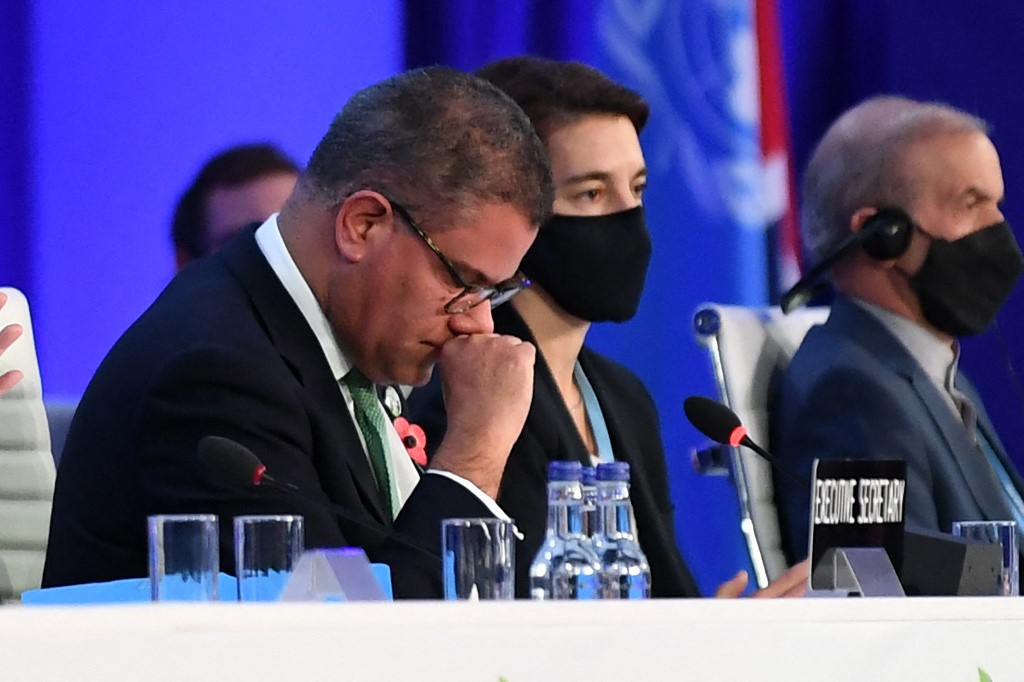 With hindsight it seems incredible that, until now, ever since COP1 in 1995 the words “coal” and “fossil fuel” have failed to make the cut in the final reports of any of the conferences of the parties to the UN’s Framework Convention in Climate Change.

That would be like a report by the World Health Organization on the global response to COVID-19 failing to mention the SARS-CoV-2 virus – unthinkable.

As every schoolchild in the world surely knows, the climate-change catastrophe looming over the planet has been generated by the unfettered burning of fossil fuels – coal, oil and gas – since the dawn of the coal-powered industrial revolution in the 18th century.

The annual failure of COP delegates to acknowledge the fossilized elephant in the room has, of course, been the product not of ignorance, but of the myriad social and economic pressures, experienced by multiple countries at different stages of development.

Forget elephants, the animal present at every COP for the past quarter of a century has been a giant ostrich, with its head buried deep in the ground. At Glasgow, the ostrich was finally allowed to raise its head, albeit only for a brief peak at reality. Even then, attempts to overthrow King Coal were watered down by last-minute interventions from its loyal subjects, China and India.

What the world needs now, more than anything else, is compelling leadership.

One announcement to come out of Glasgow was that COP28 in 2023 would be staged in the United Arab Emirates, home to the UN-created International Renewable Energy Agency (IRENA). This isn’t the first time the COP roadshow has traveled to the Middle East – in 2012 COP18 was held in Doha – but a decade on the climate-change landscape has changed utterly.

Doha was not insignificant. It was one of a series of dull but necessary COPs that paved the way toward the Paris Agreement in 2015, and it was the first time that developing countries signed up to a legal obligation to reduce their emissions.

The Paris Agreement was to limit global warming to 1.5 degrees Celsius above pre-industrial levels. To achieve that, the world needs to cut global greenhouse gas emissions by more than 26 billion metric tons every year between now and 2030. To say that the total emission-reduction pledges scraped together in Glasgow of just over 6 billion tons fell short is to understate the enormity of the gap between ambition and commitment.

It highlights the monumental scale of the challenge for the country presiding over these conferences. That the UK’s COP26 president Alok Sharma was almost in tears as he announced the watered down deal, goes someway to illustrate the personal and institutional commitments required by the host. The kind of leadership needed to rally the world’s nations and their disparate interests to commit to an agreement often appears beyond possibility. Then there is the task of making sure the outcomes and expectations of any COP event are stuck to.

The UK had to draw deep on its resources and global leadership experience just to make Glasgow happen. With more than 25,000 delegates descending on the city, the policing bill alone was estimated at more than $300 million. The pandemic brought big challenges to hosting the event, but it also gave Sharma’s team an extra year to prepare after COP26 was pushed back from 2020. The UK won the bid to host the event in September 2019, but Sharma was only appointed president in January 2020 after Boris Johnson sacked his predecessor Claire Perry O’Neill. The jostling showed the escalating importance placed on the herculean task of cajoling global powers into alignment on saving the planet. While many have called the COP26 outcomes a failure, Sharma won praise for his balanced leadership that involved building relations with small island states most at risk from rising sea levels while handling tricky meetings with Chinese officials in Beijing.

It is some of these skillsets that the UAE will have to draw upon as it prepares to take the reins in 2023. The Emirates has been entrusted to host the event based on its existing commitments towards the environment and renewable energy, including investing heavily in the new sciences of Carbon Capture, Utilization and Storage (CCUS), and nuclear energy.

Yet the UAE has more to lose than many countries from the inevitable transition to sustainable fuels, but much more to gain than most in shaping the elements of tomorrow’s energy market – and, thanks to its oil and gas revenues, it has the necessary funds to invest in the future today.

But forging its own path is very different to consensus building between nations with conflicting interests. What lessons can be learned from previous COP hosts and how the UAE can build on their efforts yet bring its own style of leadership is yet to be seen.

Doubtless many voices will be raised protesting that handing control of COP28 to the UAE is akin to asking a fox to beef up the security of a chicken coop. Fingers will also be pointed at comments this week from the group chief executive of Abu Dhabi National Oil Company (ADNOC) that “the oil and gas industry will have to invest over $600 billion every year … until 2030 … just to keep up with expected demand.”

But to express alarm at this is to misunderstand the nature of a global energy system undergoing dramatic change.

None of the world’s countries can “simply unplug” abruptly from fossil fuels. The world is recovering from the COVID-19 pandemic and demand for oil and gas is rocketing – in the process creating the essential wealth in the Gulf necessary to fund and drive the transition to renewables.

For the UAE and countries such as Saudi Arabia, much of the profit being drawn out of the earth now is being plowed directly into the type of research and development that ultimately will save the planet.

The UAE is working hard to curb its own domestic consumption of fossil fuels. Last month, it announced it was aiming for net-zero carbon emissions by 2050 – an ambitious target on a par with those of the UK, US and EU.

How? Well, it turns out that oil was not the only economic blessing bestowed on the fossil-fuel-producing countries of the Middle East.

Sunlight is the resource that gives on giving and, in the Gulf, is available for the greatest part of the year. The UAE is already leading the way with domestic solar power plants and investing in solar technology.

COP28 in 2023, will put one of the world’s biggest producers of fossil fuels in charge of negotiations to wean the world from its addiction to fossil fuels. It will put the UAE in a global spotlight that will require an exemplary level of leadership and diplomacy if the climate negotiations will continue to move forward.

And as the outcome of the UK meeting demonstrated, progress is incremental.