With Syria’s Economy and Currency in Crisis, Assad Turns to Extortion 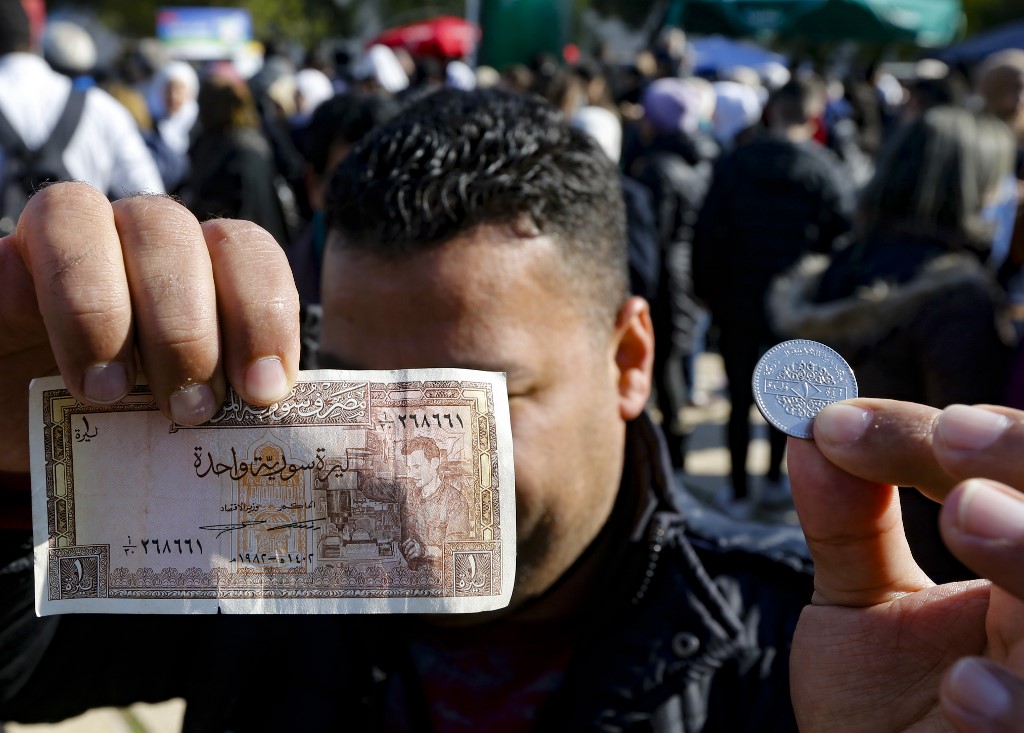 Attention to Syria has slipped. The gaze of the world, when cast toward the Middle East, now hovers over Libya, lingers on Lebanon and then alights on Iraq, Israel, Palestine and elsewhere. There is much misery in the region competing for attention. That said, suffering has not abated in Syria, either. Conditions continue to deteriorate despite the winding down of war. In this new phase, the state has resorted to another way to “manage” the everyday living condition of Syrians: extortion.

Bashar Al Assad’s main backers, Iran and Russia, may have assisted massively to help the regime win the war. However, neither has been able to sufficiently help Al Assad with the economy. Economic output has declined sharply – GDP in 2018 was estimated at just 35 percent of pre-war levels. And much of what resources remained were reallocated toward war-related activities. The concomitant drop in useful output has weighed heavily on the Syrian currency. The value of the Syrian pound plunged by half in 2016, and is now worth about a fifth of its value since the start of the conflict.

The regime’s focus currently is on stabilizing the pound, in order to control runaway inflation that has ramped up the price of essential goods and, in fact, everything else. Toward this end, Al Assad forced wealthy pro-government businessmen, including his cousin, Rami Makhlouf, to deposit foreign exchange with the central bank.

Many of Syria’s business elites, especially those who continued to operate throughout the conflict, accumulated their wealth through their connections with the regime. Thus, Al Assad may have felt entitled to ask them to return the favor. A large number of notable business figures – such as Samer Foz, Mohammad Hamsho, Waseem Al Qattan and Bara’ Al Katerji – were summoned for a shakedown. The meeting was held in September at the Sheraton hotel in Damascus under the strict condition of secrecy.

According to various sources, the attendees were pressured to make US dollar deposits to the central bank with the aim of making foreign exchange available to be sold at a dollar-to- pound rate lower than the prevailing market price. By October 15, the total value of deposits in a special account at the central bank was nearly $1 billion, according to a member of the Damascus Chamber of Commerce, Hassan Azqoul, in a report in Emmar Syria.

However, despite an initial bump in the value of the pound, with each dollar buying 615 pounds, the rate quickly continued its inexorable decline. Today, a dollar fetches around 1,050 pounds.

So now, the regime has come up with a different tactic to secure more foreign exchange.

A crackdown has begun against allegedly corrupt businessmen, to force them to hand over some of their wealth.

The most prominent among such businessmen targeted is Rami Makhlouf, who has been placed under investigation. Many of his assets have been seized or frozen, including a chain of hotels, duty-free shops, finance firms and the country’s main mobile-phone service provider, SyriaTel.

The regime has also targeted government officials for allegedly having indulged in illicit financial activities. Among them are Hazwan Al Waz, who served as education minister between 2012 and 2018, and Fadi Al Dabbas, the former president of the Football Association.

According to a source close to the regime, many of the business figures were targeted because they did not initially deposit their dollar hoards with the central bank, or because their participation was not deemed satisfactory.

Thus, some, like Wasim Kattan, reportedly were verbally told to pay up or to face consequences. Kattan apparently did as “advised,” and scrutiny into his affairs was terminated.

The selective and transactional nature of the supposedly anti-corruption campaign has attracted attention even among the regime’s sanctioned media outlets. Consequently, the issue was brought up in a TV interview by the Syrian News Channel with Al Assad himself. He claimed that the “accountability” campaign began more than three years ago, but that the effort did not gain public attention until prominent business and government figures were ensnared. He also admitted that businessmen who attended the Sheraton hotel meeting in September were asked to help state institutions, notably the central bank, and that they did so.

Al Assad’s response confirms that the regime is unable to use conventional means to overcome the country’s financial and economic crisis. Thus, those, including cronies and warlords, who benefited from Syria’s war economy are being forced to contribute to stabilizing the currency. Whatever effects might come, however, will be short-lived in a country under sanctions and able to trade only mostly with the like Iran and Russia. This will not end well.

Meanwhile, most Syrians will continue to find it difficult to scrape together the cost of a cup of coffee at the capital’s Sheraton.